Type something and hit enter

Important Notice: SarKariJobdia.Com is not responsible for authenticity, wages, fraudulent practices or any other aspect of employment without limitation. It is the responsibility of users to perform due diligence in researching employers when applying for and thoroughly research the facts and reputation of each organisation to which they are applying.


Staff Selection Commission (SSC) notified huge vacancy of 8300 Multi Tasking (Non- Technical) Staff posts right before ending the year 2016. Candidates who were waiting for SSC to release the notification can now easily apply for it by 30 January 2017. The easiest and the best way to apply is by visiting the official site of SSC at ssc.nic.in.

Candidates should know that eligibility criteria before applying for the posts. As per the commission, Matriculation is the educational qualification requirement for any candidate to apply. Candidates should be between 18-25 years of age to apply for MTS posts. 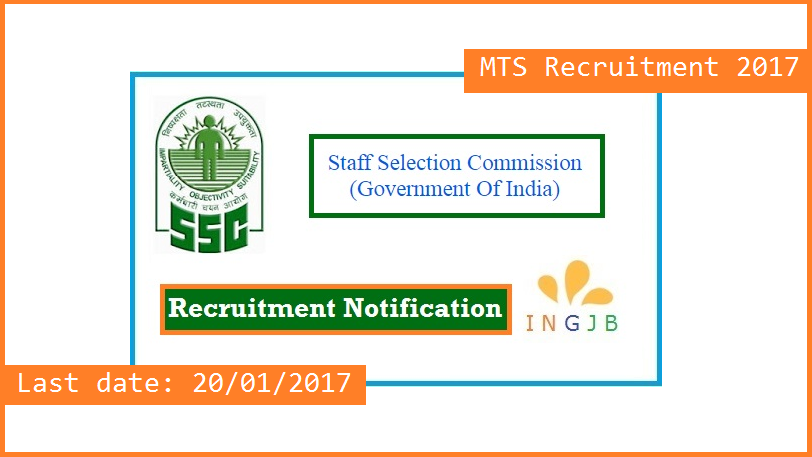 
The selection of the candidates will be on the basis of marks obtained in Paper I. Once the Paper I is qualified by the candidates, they can appear for Paper II.

Candidates applying for the job will have to pay Rs 100 as application fee if belongs to the general category. All the women candidates applying for the job post and SC, ST, Physically Handicapped, Ex-Servicemen are exempted from applying the application fee, as per extant government orders.
The examination will be held in all the states across the nation. The examination centres is posted in the notification itself.

SSC MTS Exam 2016-17 Educational Criteria: Applicants should have a degree of Matriculation (10th Class) pass out or its equivalent for these Non-Technical Posts of MTS from any recognized Indian Board

SSC MTS Exam 2017 Age Limitation: Upper age limit of applicants should have 25 years or less but not exceed to 25 years as on 1st January 2017. Age relaxation is applying as per the notification of the SSC MTS 2016-17 Examination.